It was just a few months ago when fix8 took their first round of funding from Vickers Venture Group. The amount taken was then $3M. Vickers Venture Group is a Singapore-based private equity firm. This time the company says it has landed SK Telecom, which is a leading South Korean telecom, taking some $3M more to make it $5M in total funding. Fix8’s first part of the funding took place last year in October.

Fix8 is a web cam avatar community that lets you create animated avatars with your web cam by reading your expressions and gestures. When we took a look into their web site we have discovered tons of tools that you can play around with, including fix8’s wide selection of pre-made avatars and other accessories like voice manipulation, graphics and editing tools. Those clips can easily be embedded in your website or social networking profile, or use it for your instant messaging client like AOL, MSN, Skype or Yahoo Messenger. 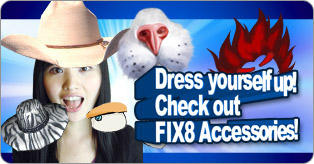