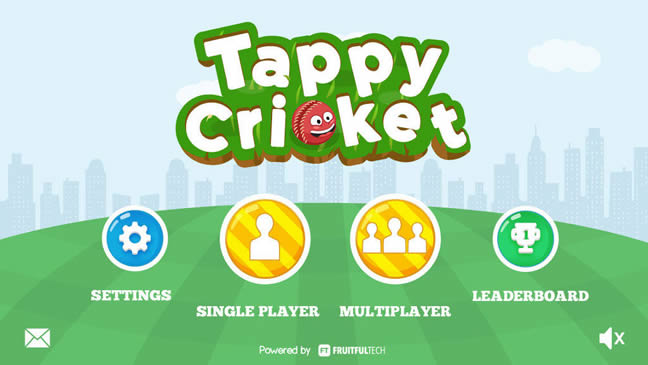 Tappy Cricket is a fun take on the popular sport of Cricket and is aimed primarily at the casual gamer. Gameplay involves tapping on the screen to keep Tappy the ball away from obstacles in typical social cricket settings, including the alleyway, beach and backyard. Runs are scored as the player progresses through the world and statistics kept that mirror the more formal game of cricket.

Other special features include:

Leaderboards
Tappy Cricket keeps track of each player’s game statistics throughout the course of their careers. Logged statistics include:

Allan Bennetto, Founder of Fruitful Technologies and Tappy Cricket said: “Cricket is the world’s second most popular sport behind football with an estimated 2.5 billion fans in the world. Many of these fans are located in Asia, where there is an perfect storm of cheap, powerful devices coinciding with new faster networks and data plans. And they love games.

With Tappy Cricket, we didn’t just want to create another simulation style game. We wanted to gamify the whole social cricket experience so the anyone could play regardless of age. We wanted the Grandparents to be challenging the Grandkids.

Se we ended up creating a game with a really simple games engine, but bolted on a sophisticated stats engine to record all player details, just like in professional cricket.

What you have now is a game that is really simple to play, but difficult to master. But like cricket, the longer you play, the better you get and the more 100s you score and the better your average is.”

Tran Cong Than, Chief Technical Architect of Fruitful Technologies said: “We’re thrilled to finally get Tappy Cricket out to the public. The game is the product of the many hours of hard-work from our development team here in Vietnam. Tappy Cricket may look simple to play, but a lot of work has gone into getting the stats engine right and syncing up scores from both iOS and Android so that players can seamlessly compete with each other. We’re just getting started too. We’ll be introducing new worlds and new game modes in the coming months. We hope the players enjoy the game as much as we did making it.”

Tappy Cricket is free to download and play. The game is available in the Apple App Store for iOS devices and Google Play for Android devices.

About Tappy Cricket
Tappy Cricket is a wacky and addictive take on the classic game of Cricket. Extremely easy to pick up and play, Tappy Cricket provides hours of fun for players of all genders and ages. Simply tap the screen and send Tappy the ball through various cricket worlds and obstacles and compare your runs, highest score and average against the best.

Tappy Cricket is available for free for iOS and Android devices.