Behavioral Targeting (BT) has been around since the first dotcom days. It got really hot again in late 2007 thanks to a few big promoters like Facebook. But what is it and does it really work as it sounds?

BT tracks a web visitor’s browser-click-streams, typically in the last six visits, to predict what he or she may want in the 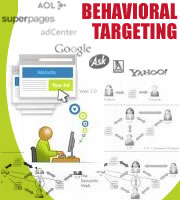 future, and target ads, content or products based on those “personalized” past behaviors. The hope is that BT will show the right ad or product to the right user who is most susceptible to it.  This sounds ideal to advertisers, but, put yourself in the shoes of a user and two huge problems leap out: privacy and quality.

The Privacy Issue
With such a glut of products and information online, the motivation behind behavioral targeting makes sense – it seems to be a good thing for Yahoo to get me a more relevant ad because they happen to know I checked out a Prius in my local dealership. For consumers, however, there is an obvious psychological aversion to behavioral targeting, as they feel they are being personally tracked and watched.

In this age of identity theft and mounting concerns over privacy in general, a practice that proactively profiles a user, perhaps over the scope of many websites and over a period of several months, will sound alarms even among the least conservative of us. And while BT advocates will defend their practice of storing only anonymous data —
which is the proper thing to do — knowing that your likes, dislikes, shopping history, and viewing tendencies are being tracked and possibly shared or sold to advertisers is disconcerting at the least.

In addition, with so much information about us on the web, an anonymous individual on one site can quickly become a known/named user on another site once BT starts to compare and contrast user behaviors across multiple sites. So our private information can spread out very quickly without us even knowing it.

Not surprisingly, many advocacy groups are very concerned about the issues surrounding this type of targeting.  Privacy groups have recently proposed a “Do not Track” list to limit behavioral profiling techniques similar to “Do Not Call” lists that keep pesky telemarketers away.

Privacy concerns seem to be enough to limit the impact of BT. But there is more.

The Bigger Pitfalls of Behavioral Targeting
Beyond privacy concerns, there are accuracy and quality issues with BT that all online marketers and e-commerce managers may not be aware of.  Traditional BT struggles precisely because it tries to discern what I want now based on my past behaviors. Consider the impact of focusing on historical interests instead of current intent – if I bought a gag gift for a bachelor party, I certainly do not want to be bombarded by ads for similar “products” that might cause embarrassment or make me the butt of the joke around the office.

Another way to think of this problem is the idea of roles or personalization.  Humans have far too many roles in life – or what personalization systems might call profiles – to possibly predict what a given user wants on that day.  A woman shopping for baby clothes, a tie for her husband, and a gift for her sister may appear schizophrenic because she is acting in three different roles – mother, wife, and sister.   What do you show her next?  Tossing ads at her about strollers is not going to appeal to her now that she’s shopping for a new cocktail dress for herself.

This is the pitfall of profiles.  In a given month, an individual will have thousands of roles. Knowing my past is not necessarily a better way to predict my future. In fact, this phenomenon has been known by psychologists and other scientists for years – humans are animals of context and situations, much less so of our historical profiles or roles.

Let’s look at Facebook’s behavioral targeting practices. Alex Iskold recently wrote a good blog in ReadWriteWeb about a little myth regarding how behavioral targeting is going to help Facebook justify their $15 billion valuation. I like Alex’s summation of the myth: “because Facebook knows everything about us, it will always be able to serve perfect ads.” But the reality is very different.

Facebook does not really know much about us, especially anything about our true intent at any given moment when we are on the network.  Their user profiles are historical artifacts and not tied to current intent. In addition, the behaviors that users exhibit on Facebook are about connecting with one another – not about reading, researching, and buying like the rest of the web. And finally, when users connect they’re only acting in one of their infinite roles.

In the end, the ads we get served on Facebook today are the direct result of the lack of understanding of its users.  Those in the ad industry liken these to “Run of Network” ads which are not targeted and are simply designed to get a fraction of a percent click-through.  Unsurprisingly, most ads are about dating.

Enter Intent-based Targeting
An alternative that solves the issues with both privacy and effectiveness is one centered on understanding the user’s intent, instead of their clickpath or profile, and pairing that with specific content, product, and advertising recommendations. This approach relies exclusively on the collective wisdom of like-minded peers who have demonstrated interests or engagement with similar content and context.

The concept of profiles is completely removed in this case, and instead by understanding the user’s expressed or implied intent that user will see the content that is appropriate to their current mindset.

This is the next evolution in user targeting that gets beyond clicks and analytics, and instead rests on a proven foundation of modern social science theory.  The approach is conceptually simple and mimics how we learn and act in everyday life – making choices based on what others who are in the same current mindset as us have done.

Since humans change roles rapidly, intent-based models allow content recommendations, ads, and even search results to change instantly as users act in a new or different role.  Further, because historical actions and profiles are not needed, 100 percent of the new visitors coming to a website can be targeted with precise content before the first click.

Win/Win
Website users care about privacy and usability on the web.  Targeting visitors based on their intent, which is validated by the collective wisdom of those before them with the same intent, is a natural way for visitors to interact with your website – it’s the way humans have been programmed to work.  Most importantly it kills two birds with one stone: users get useful, accurate recommendations and ads while still avoiding the whole privacy mess.

Jack is a founder and CEO of Baynote, Inc., a provider of Intent-driven Recommendation and Social Search technology for websites. Previously, Jack served as SVP & founding CTO of Interwoven Inc. with responsibilities across engineering, products, marketing, corporate vision and strategy. Prior to Interwoven, he was a founder and CEO of V-max America. Jack also led operating systems and applications development at SGI, Sun Microsystems, Stratus and NASA. He is a frequent major conference speaker and has appeared on television programs in several countries. He is a contributing author in “XML Handbook, the 4th Edition”, “Online! The Book”, “Content Management Bible”, and writes regularly about key technology issues and trends. He can be contacted at jack@baynote.com.