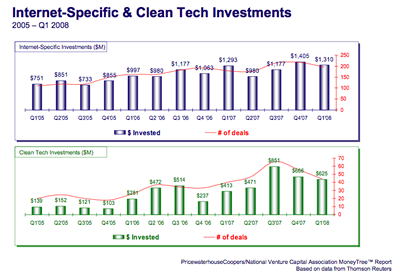 Today we have read over a few technology and business blogs that angel investors have poured $26B in start-up companies for the last year alone. Aside the fact this is an impressive amount of money it is also very close to what VCs did themselves – $29B. Furthermore the number of deals backed up by angels is way bigger than the number of deals venture capitalists closed – 57,120 vs. 3813 deals in behalf of the private investors. The sources also claim there are 258,200 active angel investors in the USA alone. The vast majority of the angel deals go for Software and Internet start-ups. Angel

investors continue to be the largest source of seed stage and early stage start-up capital, with 39% of 2007 angel investments going there. Based on those reports it seems the angels most rely on mergers and acquisitions for their exits, while VCs are more inclined for IPOs.

Basically angels tend to invest just like VCs do except they do smaller investments $200K to $2M and they do about 15 times as many deals as VCs. In most cases angels have the same investment criteria and expectations of significant returns as the VCs look for. The average deal size (seed stage) is about $250K.

The larger angel groups in Silicon Valley and Boston do significantly more deals and invest between $350K and $600K per round, and maybe $1.5M to $2M per company.

The conclusion here is that launching a start-up company and then getting it off the ground is a whole lot cheaper today then it used to be some years ago. This somehow leaves most of the traditional VCs out of the game since either angel investors are beating them or the large Internet players are buying those start ups far before the VCs get their hands over them.

As Paul Graham from Y Combinator points out there is is growing gap between the $20K to $100k most angels will put in and the $2 million to $3 million that a venture firm will commit. He argues that what startups need are more investments somewhere in the middle to fill that gap. Most Web startups don’t need $2 million. They need $300,000 or $500,000. But most venture capitalists don’t think those types of investments are worth their while.

Here is an interesting list of tips for you on how to land an angel for your start up business.