SpinVox, a London based voice-to-text technology is raising $100M round of funding from a bunch of high-profile investors among which are Goldman Sachs, GLG Partners, Blue Mountain Capital Management and Toscafund Asset Management. The service can basically be described as a solution that transcribes voicemails to text so that they can be more easily digitized, searched, and manipulated. SpinVox’s software works simply by converting a voicemail message into 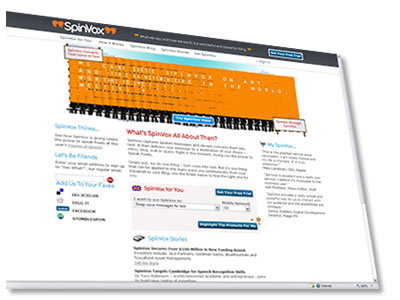 text, which it then e-mails to a computer or sends via SMS to a phone. It removes the need to dial one’s voicemail, punch in a password and listen to messages.

This brings the total money invested in the company so far to $200M and today’s round is said to have been done on $500M pre-money valuation. What is also interesting with the company is that the CEO, the 31-year-old Christina Domecq is from the famous liquor family Domecq from UK that was part of the international company Allied Domecq PLC that operated spirits, wine, and quick service restaurant businesses. Allied Domecq was the result of a 1994 merger between Allied Lyons and Pedro Domecq. Rumors go up to the point that SpinVox was planning on an IPO before, but today the company has said it has no immediate plans to go public or sell itself but is exploring all options.

SpinVox is said to have partnerships with 12 mobile carriers, mostly in Europe, including O2, Vodafone, Orange, T-Mobile, 3, and Virgin Mobile, but is barely presented on the US market.

The funds will be devoted to further building the global business of the UK-headquartered company that already operates on four continents.

“Closing this funding round is an exceptional achievement given the current state of the global financial markets,” says Christina Domecq, CEO and Co Founder of SpinVox. “We are delighted to have this group of institutional investors join the company. It clearly underlines the confidence these high-calibre investors have in SpinVox and the management team.”

The new round builds on previous investments made in the company by private equity investors such as Martin Hughes, Charles Dunstone of Carphone Warehouse and Peter Wood, the founder of Direct Line, eSure and Sheila’s Wheels and institutional investors such as ABN Amro, Gartmore and Allen & Co.

“We built SpinVox to answer a real need in the marketplace and have now established a vast new market for voice-to-screen messaging which we continue to lead,” continues Christina. “One of the many reasons why people are getting so excited about SpinVox is that it is one of the few genuinely innovative companies to have emerged in the telecommunications arena in recent years. SpinVox is transforming core messaging for carriers world-wide and delivering new, recurring revenues from existing user behaviour.”

Goldman Sachs International acted as exclusive financial adviser to SpinVox on the transaction.

Most of the technology bloggers simply followed up on the PR materials being sent to them and have positively reviewed the service, but we think there is plenty of room for improvements and the reportedly $500M valuation for the company is hard to understand and justify.

However, the guys from Mashable have more critical look into the technology and have written that while the company is trying to make all the right moves, by opening up MySpace and Facebook applications, the core technology, “continues to fail hard.” We tend to agree with them.

Below are some transcripts from Mashable’s author when he attempted to get the service to accurately translate his voice to text:

Mark Hopkins, an author at Mashable, has further said that he has spoken to folks far more familiar with the limitations of VTT (voice-to-text technology) technology that it just isn’t feasible with current standards of computing.

A guy that claims to work for the company has saidthe following. I work for SpinVox and have a window on the process. SpinVox employs a series of speech engines and the majority of our English conversions are automated. The Voice Message Conversion System is actually a “live learning” system that “knows what it doesn’t know”. When it encounters new language or ambient noise that confuses the automated process, it then asks a human to review that portion of the message in dispute. That person then converts the portion of the message in dispute and the complete conversion is then delivered. To date we’ve had about 4 million unique voices pass through the system which improves our ability to understand any voice.

Others, like Rob Abbott, are more favorable explaining that the value of indexable, searchable voice transcriptions is significant. Once integrated into an application like a mail client (Gmail, Mail, Outlook…etc.), the value is clear. The time spent transcribing important voice messages, interviews and conversations is cut by these services. While some services, like SimulScribe and SpinVox do send the audio to markets with cheap labor, the service isn’t always optimal or exact.

I am a current user, he says, of both services and it’s of enough value for me to become dependent on once my habits change. I get previews of my voice messages sent to my iPhone in SMS form, so I know who called and most importantly, why, without having to play the message (in a meeting).

Goldman Sachs is investing in the distributed service and in the technology, so SpinVox is widely integrated into applications which increase productivity, and so the quality of the transcription technology involves to an accurate service, whether it be by human or machine (or both).

Some competitors include Jott, Pinger, SimulScribe, among others.

We launched in 2005 through The Carphone Warehouse, The Link and other retail channels. Pretty soon we had over 130,000 regular users, with an unprecedented customer retention rate of 80%. People who started speaking through SpinVox soon found they couldn’t live without it.

SpinVox has since won major industry awards from people like the GSM Association, Red Herring and Ernst & Young. No, we’re not boasting, we’re just pleased. In fact we’re amazed at how SpinVox is changing people’s lives.

At the heart of SpinVox is our patented Voice Message Conversion System™ (or VMCS to keep it simple). It underpins everything we do – our retail, enterprise, service provider and global carrier services. It’s maintained on an enterprise-class hardware infrastructure by an expert management team, to meet the rigorous demands of global carriers and their customers. Which means it just works, brilliantly.

From retail brands and direct customers, to global carriers and Web 2.0 brands, we are leading the way in converging voice and screens. SpinVox products are used on five continents, in five languages, with new carrier and technology partners joining us every month.

SpinVox has 300 employees and offices in nine countries.