One of the most important technology conferences for the year will be held in March 3-6 in San Diego, California. ETech the O’Reilly Emerging Technology Conference, now in its seventh year, will take a wide-eyed look at the brand new tech that’s tweaking how we are seen as individuals, how we choose to channel and divert our energy and attention, and what influences our perspective on the world around us. How does technology help you perceive things that you never noticed before? How does it help you be found, or draw attention to issues, objects, ideas, and projects that are important, no matter their size or location?

Below is what the 2008 version of ETech, the O’Reilly Emerging Technology Conference will look at.

Body Hacking. Genomics Hacking. Brain Hacking. Sex Hacking. Food Hacking. iPhone Hacking.
If you can’t open it, you don’t own it. Take over the everyday aspects of your life and take your senses to the next level. 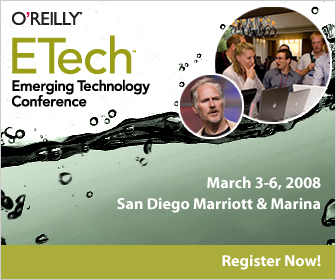 As technology becomes more accessible you’ll get to do it all on your own. Self-empowerment starts here.

Emerging Tech of India, Cuba, and Africa. International Political Dissidents.
Different environments incubate new ideas and technologies. What these societies bring out will shake up your cultural assumptions and provide a wider world view.

Alternate Reality Games. Emotions of Games. Sensor Games.
Games provide a platform for experimentation on so many levels. The ones we’ll see engage their players in new and unexpected ways.

ETech 2008 will cover all of these topics and more. We put on stage the speakers and the ideas that help our attendees prepare for and create the future, whatever it might be. Great speakers are going to pull us forward with them to see what technology can do… and sometimes shouldn’t do. From robotics and gaming to defense and geolocation, we’ll explore promising technologies that are just that–still promises–and renew our sense of wonder at the way technology is influencing and altering our everyday lives.

“There’s more good stuff here, more new directions, than we’ve had at ETech in years, which is only to be expected, as the market starts to digest the innovations of Web 2.0 and we are now featuring the next wave of hacker-led surprises.” Read more of Tim O’Reilly’s thoughts on why ETech is our most important conference.

Below are listed all confirmed speakers to date.

You can register as an attendee online or by Mail/Fax at the following address:

Walk-ins: Standard registration closes March 2, 2008. The onsite registration fee is an additional $100 to the Standard Price above.

Now in its seventh year, the O’Reilly Emerging Technology Conference hones in on the ideas, projects, and technologies that the alpha geeks are thinking about, hacking on, and inventing right now, creating a space for all participants to connect and be inspired. ETechs past have covered peer-to-peer networks to person-to-person mobile messaging, web services to weblogs, big-screen digital media to small-screen mobile gaming, hardware hacking to content remixing. We’ve hacked, blogged, ripped, remixed, tracked back, and tagged to the nth. Expect much of what you see in early form here to show up in the products and services you’re taking for granted in the not-too-distant future.

ETech balances blue-sky theorizing with practical, real-world information and conversation. Tutorials and breakout sessions will help you inject inspiration into your own projects, while keynotes and hallway conversation will spark enough unconventional thinking to change how you see your world.

More then 1200 technology enthusiasts are expected to attend ETech 2008, including:

The conference is expected to gather some of the brightest minds of today’s technology world and Web in particular.
More